The Kingdoms of the West are scattered across four landmasses; Aurodei, Western Ersai, Eddrah Kha, and Chula. 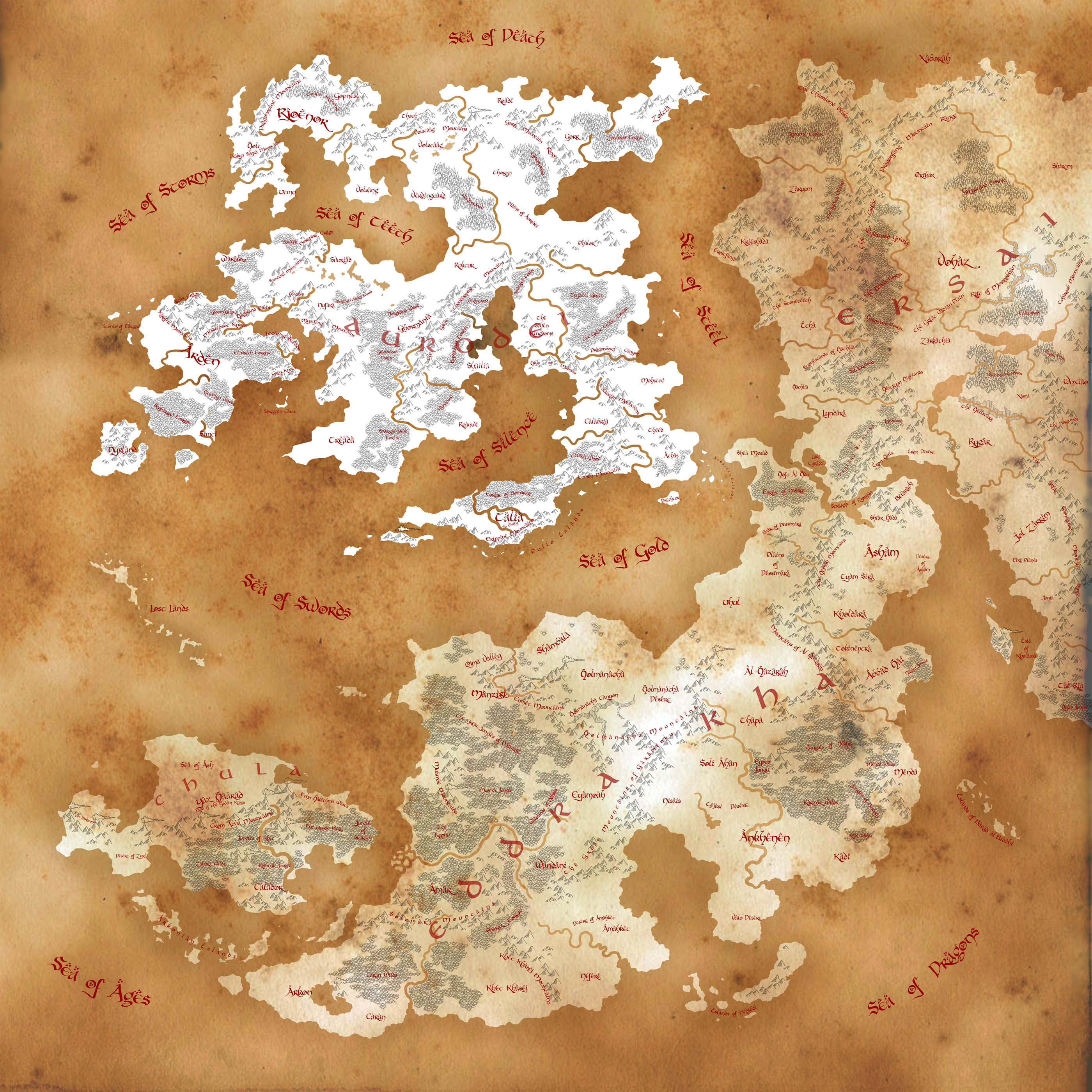 Aurodei (ar-oh-day) is the central landmass of the western world. Aurodei touches every sea but two; the distant Sea of Dragons to the far east, and the mysterious Sea of Ages to the southwest.

The population diversity of Aurodei is nothing short of staggering. Here can be found every walk of life known from tribal barbarian kings to liberated free city states to imperialistic monarchies. As such, there is no prevailing government of Aurodei. In fact, the world at large sees the notion of uniting these lands as a steadfast impossibility.

Every variety of human, demi-human, giant and humanoid can be found in Aurodei. Dwarves are found primarily in the western Thunderspine Mountains. Elves dominate the Grandwoods north of Treada, the Byrnwoods west of Shailia, and the Great Eldar Forest in the central Seven Kingdoms. The halfling homeland of Waraloo is also in Aurodei and can be found north of the western kingdom of Arden. North of Athea and east of Khalhaboria are the wastelands of Mohstov where dwell the dragonborn. Men and wild things claim all the rest.

Land relief in Aurodei shows a profound variation within relatively small areas. The central and southern regions are mountainous, while moving west the terrain descends from the high Thunderspine, Volstaag and Gorr mountain ranges through hilly uplands, into broad, low southern plains, which are vast near the Seven Kingdoms. An arc of uplands also exists along the northwestern seaboard, beginning in the northwestern land bridge that connects Aurodei with Arden and continuing along the mountainous coastline of Ghormania.

Some of the more notable kingdoms of Aurodei include: 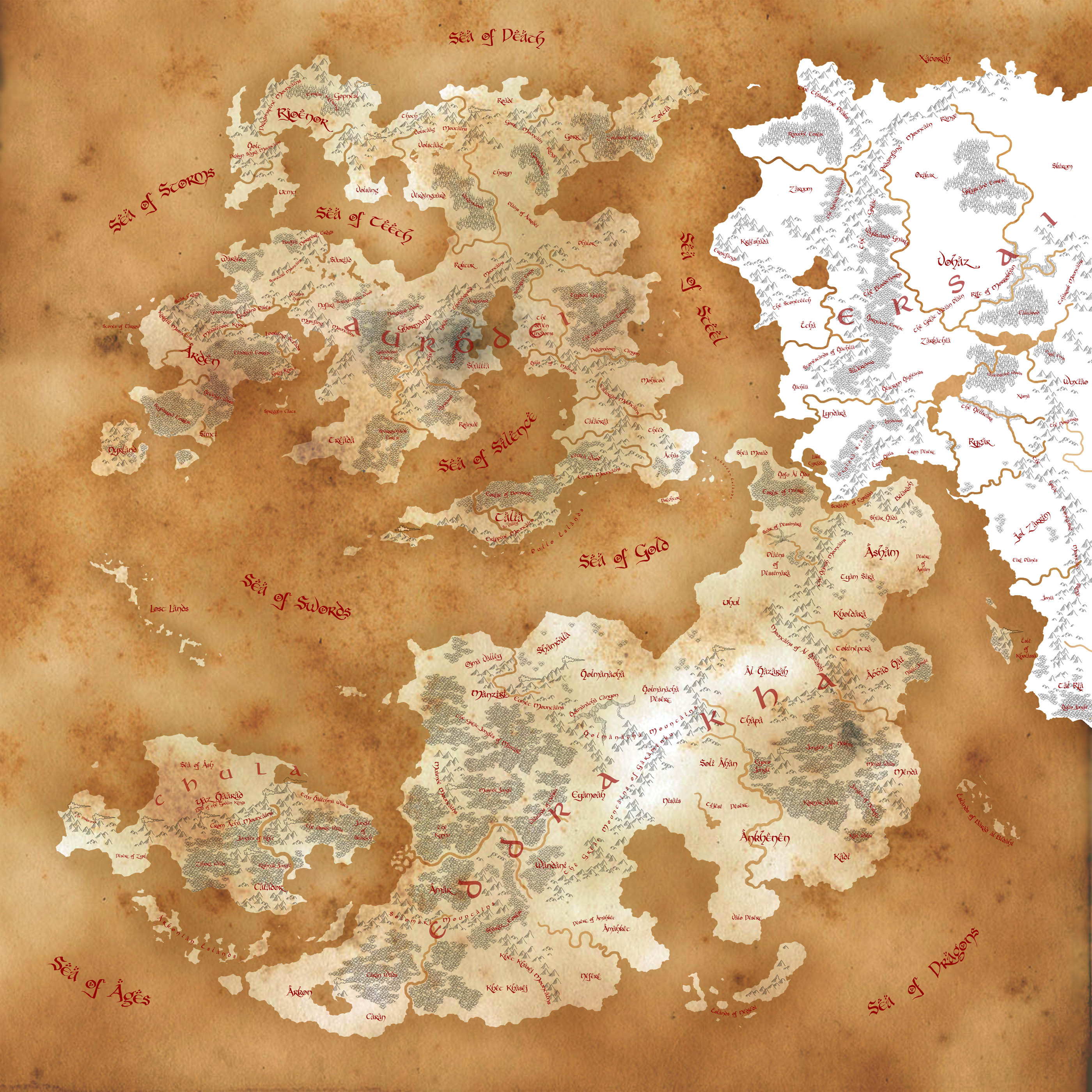 The topography of Ersai is comprised of a series of high mountain belts, which are the dominant landforms, and a related complex of plateaus, basins, island arcs, and alluvial lowlands. The highest point is Mount Faustfara, which towers to 30,000 ft in Oiqem; the lowest point is 1,300 ft below sea level along the shores of the Sea of Dragons in Jol Zarrim and Kusphet. The Stoneguard Mountains on the western edge of Ersai trend in a north-south direction, but most other belts extend across the continent in a general west-east direction and converge in a knot of high mountains in the Tcharosk, located where the borders of Skirum, Wuxaio, Vohaz, and Urokestan come together.

West and south of the Tcharosk Mountains, two main mountain belts are discernible.

The northern mountain belt in Ersai west of the Tcharosk enters the continent at the the plains of Xaborah. It swings Westward to form The Great Dragonfang Mountains between Vohaz and the Sea of Steel, continues south through Itha as the Stonestands of Hathlia and the Hestruun Highlands on the Lyndara-Zarkathia border, and crosses into Asham to merge with the Mountains of Hazarah.

The southern mountain belt stretches from the southern lands of Skirum and reaches as far south as the Sea of Dragons and the Island of Kholassa where it is known the world over as the Stoneguard Mountains.

Ersai’s large geographical territory gives it a very diverse climate. Its northern coastline borders on the Sea of Death, which gives it severe winters. In the south near Rygar, Ersai has hot desert areas.

Some of the more notable kingdoms of Ersai include: 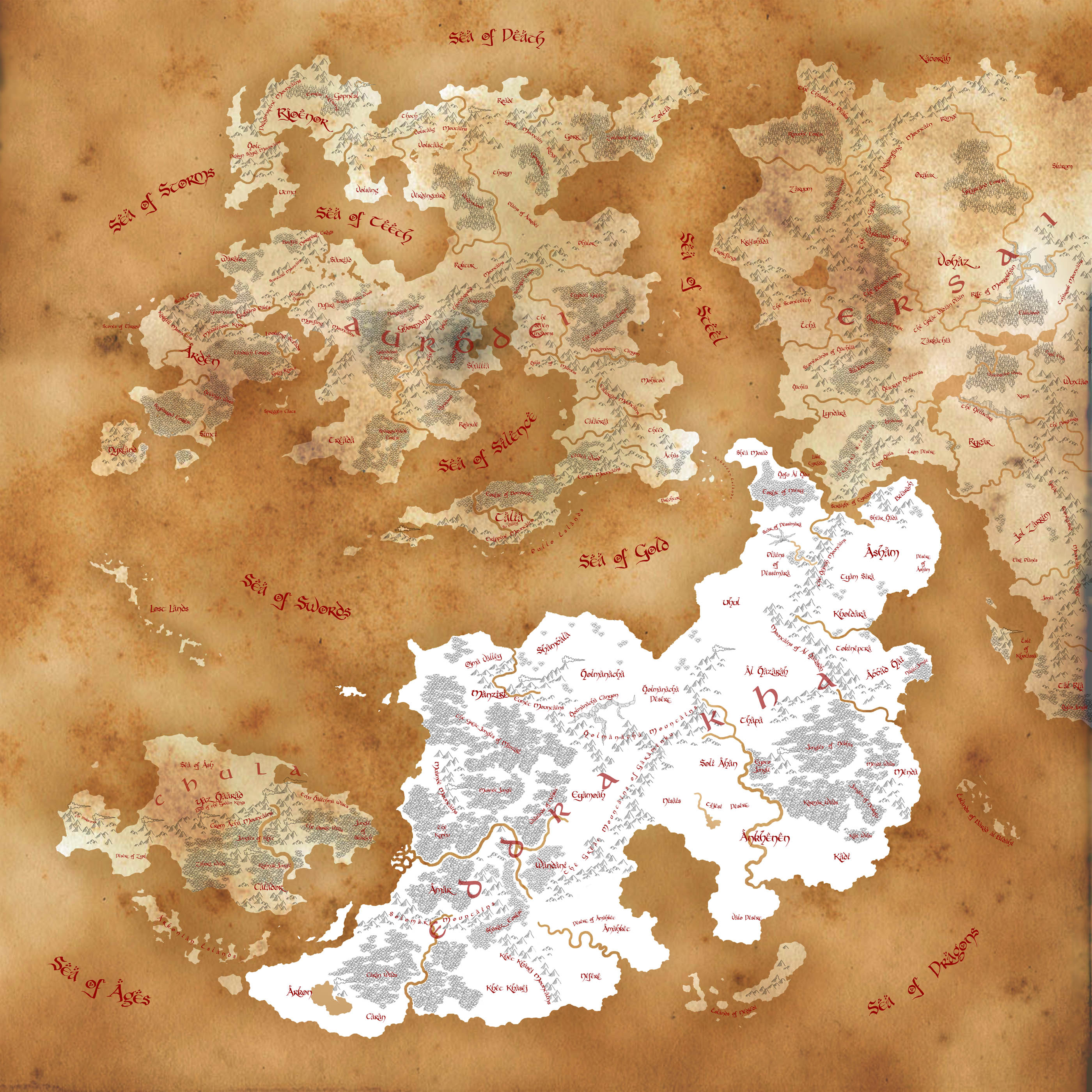 Eddra Kha (eh-drah-KA) is located south of the Sea of Gold and west of the Al Hazarah desert. It is a remarkable and complex land of diverse topography and fantastic landscapes ranging from paradise-like gardens to hellish stretches of volcanic terrain.

Most of the farming land is found within sheltered valleys in the Eumet mountains, the Ojma valley and delta, and along the Golden Coast. A wide variety of valuable crops including cereals, rice and cotton, olives, figs, dates, citrus fruits and woods such as cedar and cork are found in these areas. The Ojma valley is particularly fertile, and most of the people of Eddra Kha live close to the Ojma River. Elsewhere, irrigation is essential to support crop yields on the desert margins.

The climate of Eddra Kha is as diverse as the land itself- hourly rains fall within the jungles south and west of the Manziri nation, while to the east within the Eumet basin, entire seasons may pass between rainstorms. Eddra Kha is a very warm place with snow only ever found on the highest of mountaintops.

Some of the more notable kingdoms of Eddra Kha include: 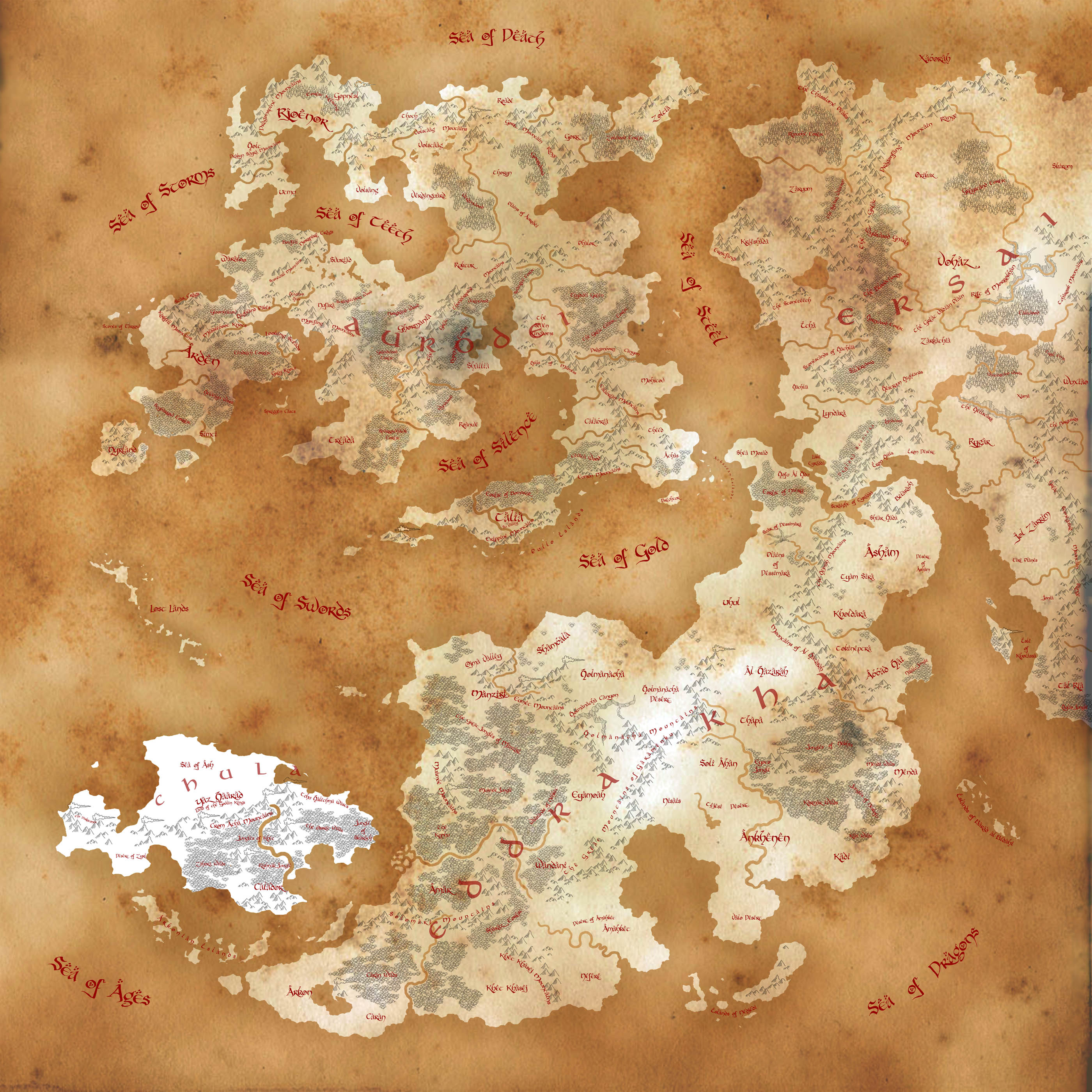 Chula (CHOO-lah) is an island country found off of the western coast of Eddra Kha. Its shores touch the Sea of Storms to the northwest, the Sea of Swords to the north, and the Sea of Ages to the west. With a chain of ever-erupting volcanoes and nearly a third of its landmass covered by sulfuric deserts, Chula is one of the most inhospitable lands in the known world.

The northern shores of Yaz Haraad are predominately desert, marking nearly 1800 miles of scorched wasteland where very little survives. Transecting the land from east to west are the Crom Atha Mountains, a series of volcanic peaks both active and dormant that range in height from 5,000 to 9,000 feet. South of this wall of fire and stone the landscape becomes strangled by jungles and primordial rainforests where the thunder lizards dwell.

North of the Crom Atha, rainfall is almost unheard of, while the wild jungles to the south are pounded by a deluge of hot, torrential rain almost hourly. Volcanic activity is common and in some places constant, and an ever-prevailing haze of ash and fume can be found throughout this hellish realm.

This is a land overrun with goblins, giants and ogres. Goblin pirates scour the seas on the fringes of Talian shipping lanes, ever watchful for the less protected. In the jungle fringes of southern Yaz Haraad war is common between tribes of orcs and hobgoblins who frequently make use of captured behemoths as beasts of battle.

In all of Chula, only the southern peninsula of Calador maintains a somewhat temperate climate. Here can be found the only bastions of men, drawn by the lure of exotic riches and the bizarre treasures of the wild. These are strongholds of bandit kings by and large, and known the world over as the dark havens of the worst of humanity.