The Bloodlines of Humanity

There are nine primary Bloodlines of Humanity scattered across the face of the Known World. While other Bloodlines surface here and there from exotic lands beyond the seas and east of Wuxiao, these nine principals of human stock have significant enough cultural heritage and identity that they can be traced to inherent nations of people. In addition to their respective cultural observations, these delineations of mankind also more often than not share a common language.

A region marked on the map as Vast Majority indicates that the respective Bloodline listed will have a clearly defined dominant presence.

A region marked on the map as Common Minority indicates that the respective Bloodline listed will have a population density that is no greater than 1 in 5.

Unmarked regions on the map indicates that the respective Bloodline listed will have a population density that is no greater than 1 in 10. 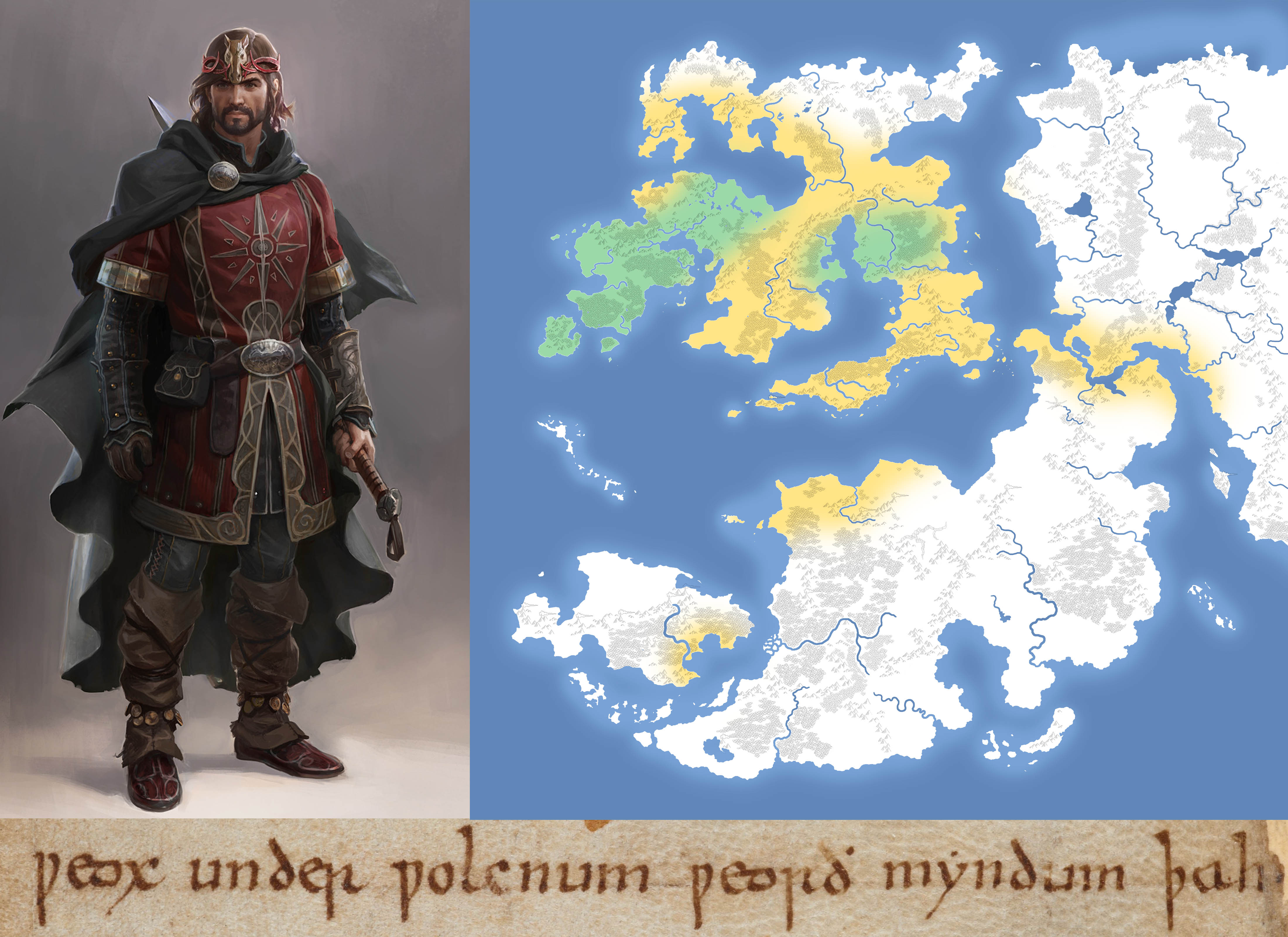 Homeland: Arden
Language: Ardish
Alphabet: Talian
Ardin is the westernmost kingdom of Aurodae. The Ardish are for the most part a fair skinned people with a very broad variety of hair color. The notable exception to this is found in the clans of the southern lands of Simti where the people are predominately dark in both hair and skin tone. 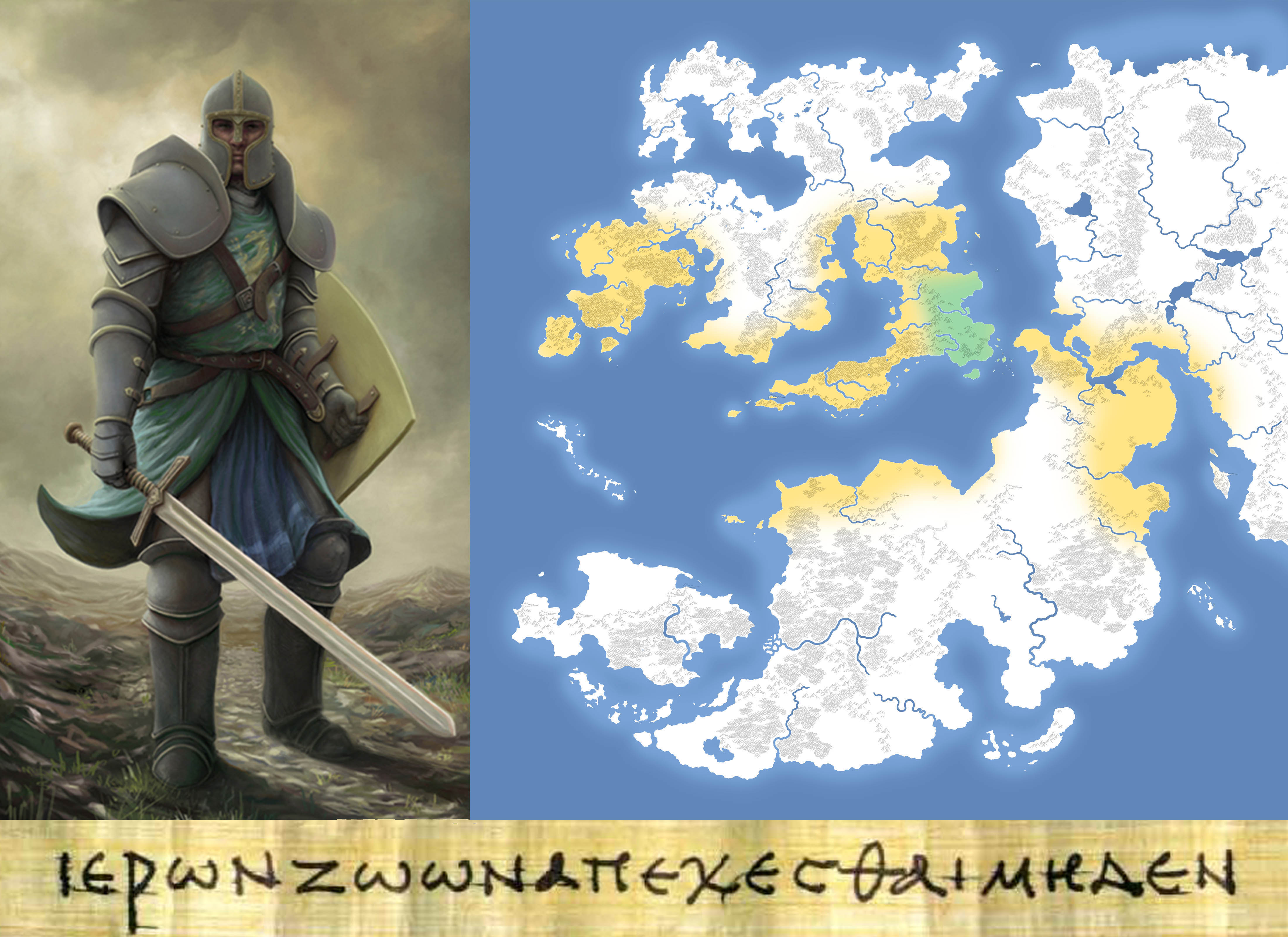 Homeland: Athea
Language: Athic
Alphabet: Talian
The Athean people are generally olive skinned with dark hair and can have eyes of nearly any color. There is an interesting and unique tendency however for an Athean to be born as an Alabaster; a person of absolute white features, or as an Onyx; a person of jet black. Though they are flesh and blood like any other, these offshoots appear as living statues, and while they are revered by the Athean people as touched by the divine, they often encounter scorn when they travel abroad. 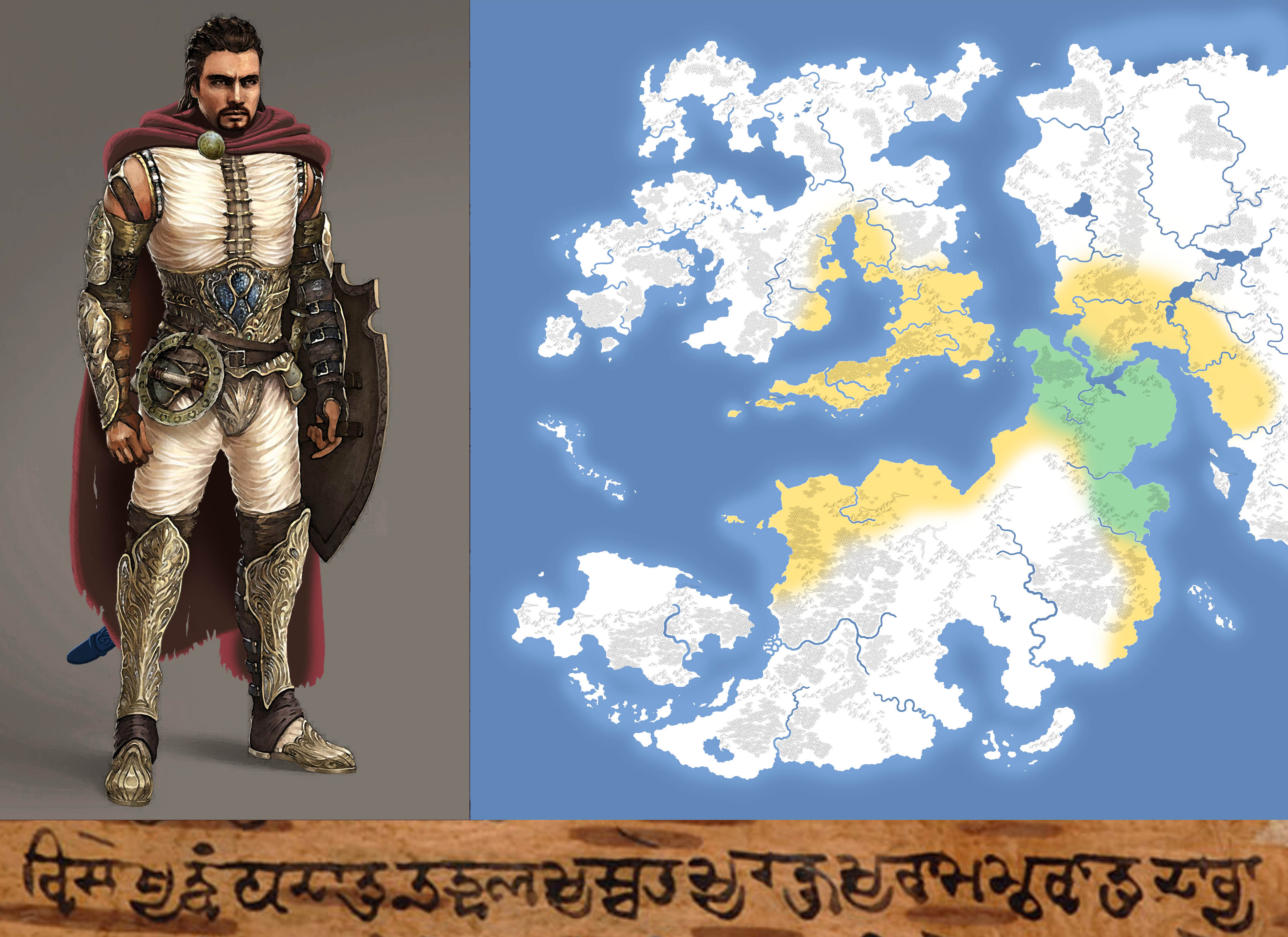 Homeland: Asham
Language: Yadira (Ashamie)
Alphabet: Lyramaic
By and large the people of Asham are dark in hair and complexion. Skin tones range from a walnut brown to a deep mahogany. Eyes are brown and hazel for the most part, though there is found a green eyed individual from time to time. 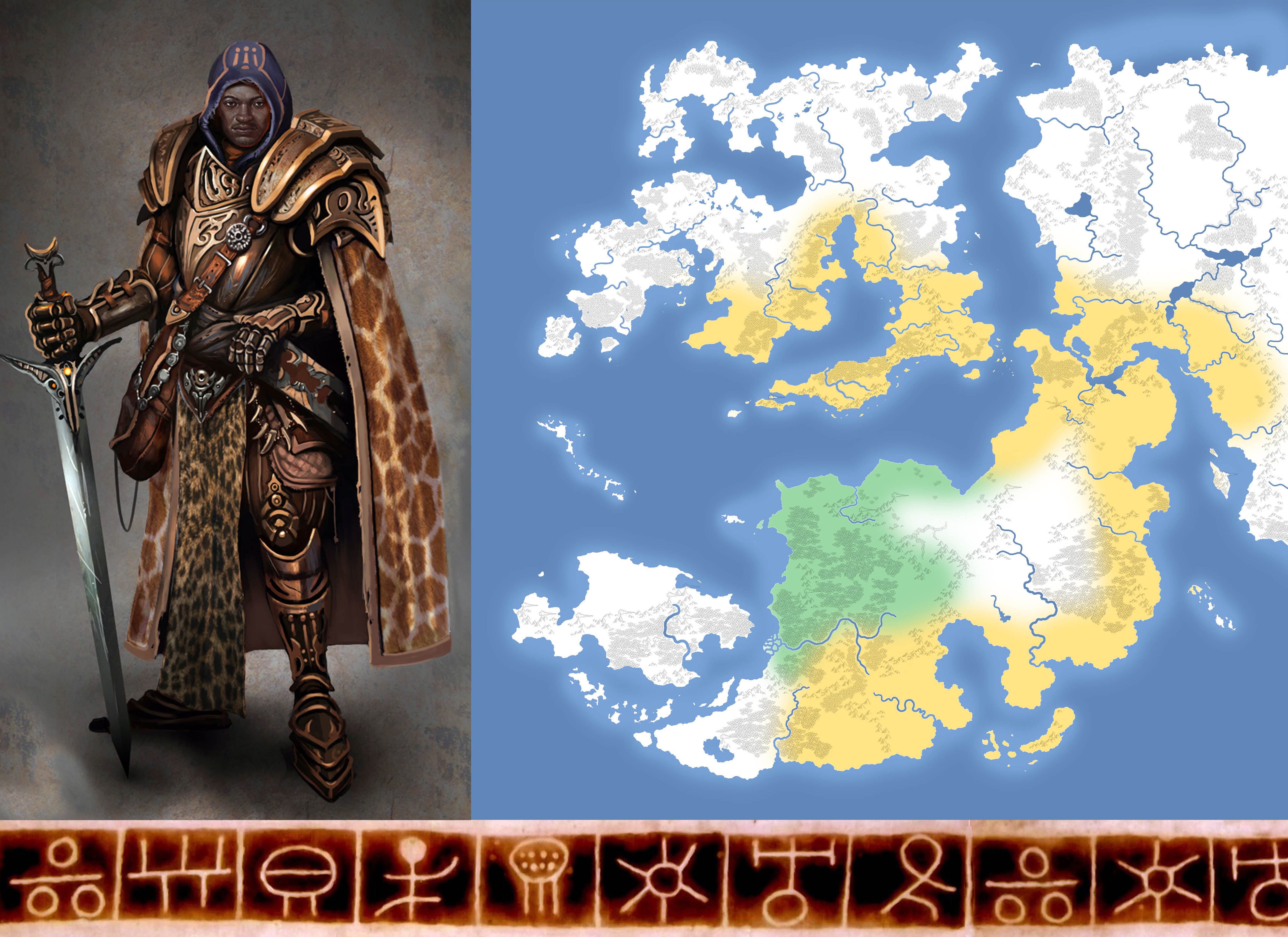 Homeland: North Eddra Kha
Language: Kombutu (Helia, Ziri, Jo’ Um)
Alphabet: Liabee Glyph
The people of Eddra Kha are universally dark skinned and dark haired. There is a staggeringly wide variety of cosmetic alteration in the form of tattoos, skin etching and hair coloration. Eye color is most commonly brown, but there are those born with blue, green and gold eyes from time to time. These individuals are always seen as blessed children, and are usually placed in the company of a wise shaman for advanced training. 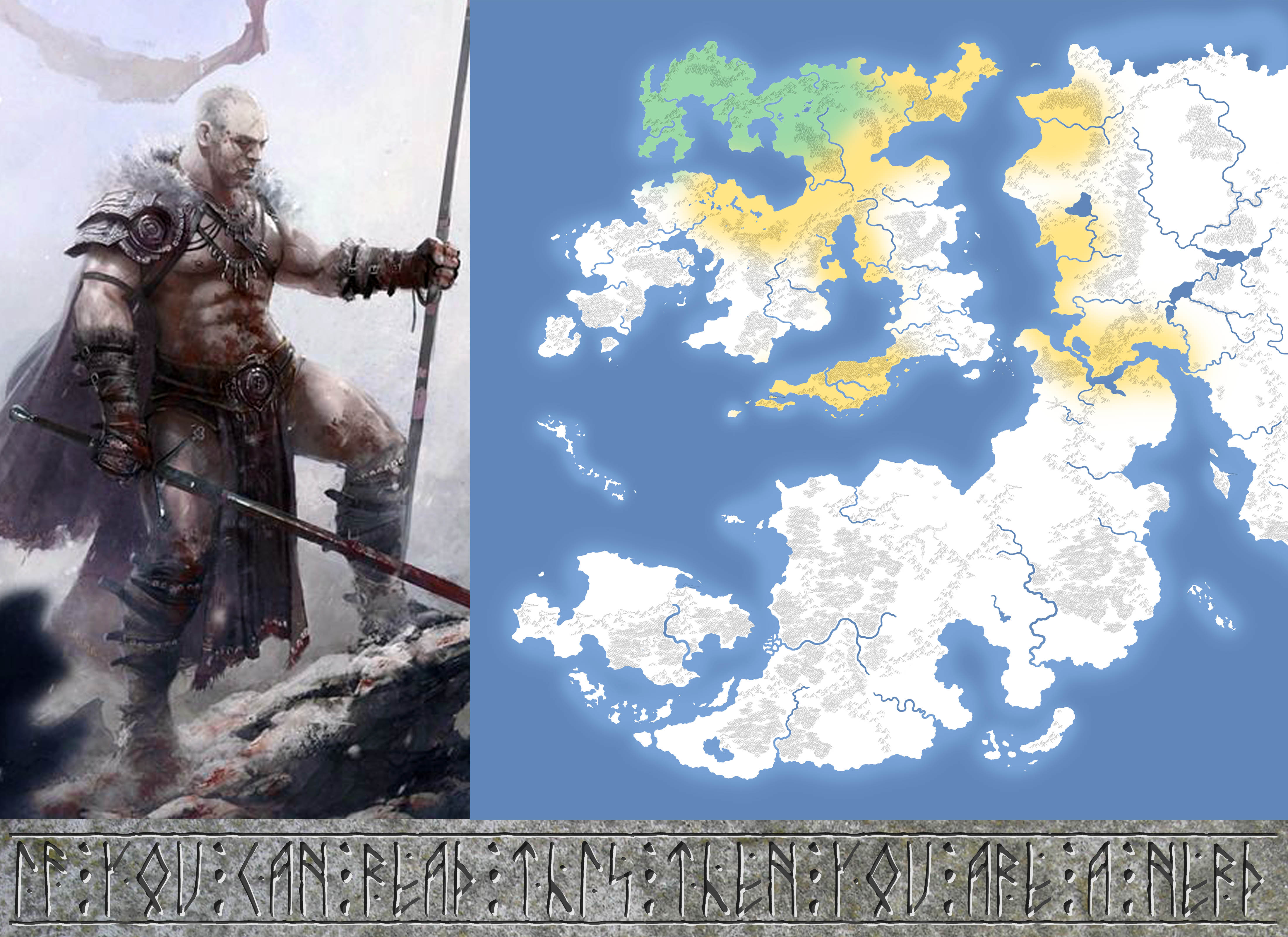 Homeland: Rjoenor
Language: Rjurik (Uric)
Alphabet: Dethic
The Rjoen are a light skinned people with eyes ranging from grey-green to brown to an icy blue. Hair color is more often than not reddish-blonde to blonde, though brown and even black hair remains common enough. Clan tattoos are very popular among the northern people. 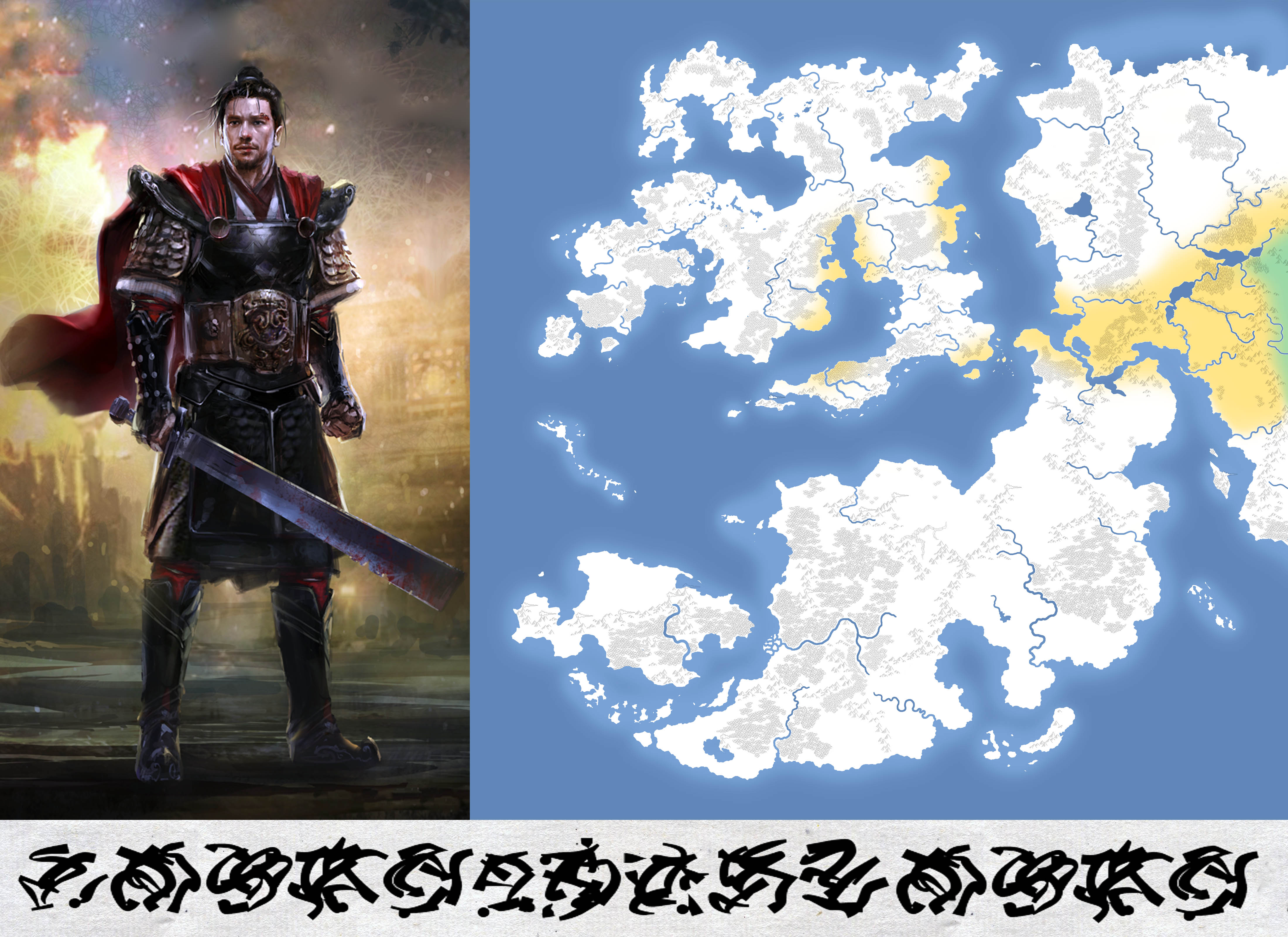 Homelands: Ersai, East of Wuxiao
Language: Nari Gho
Alphabet: Rihoji Glyph
The Sunari are golden-skinned and almost universally have dark hair. Their almond shaped eyes are most commonly brown, though there are occasions of other colors including green, blue, and grey. 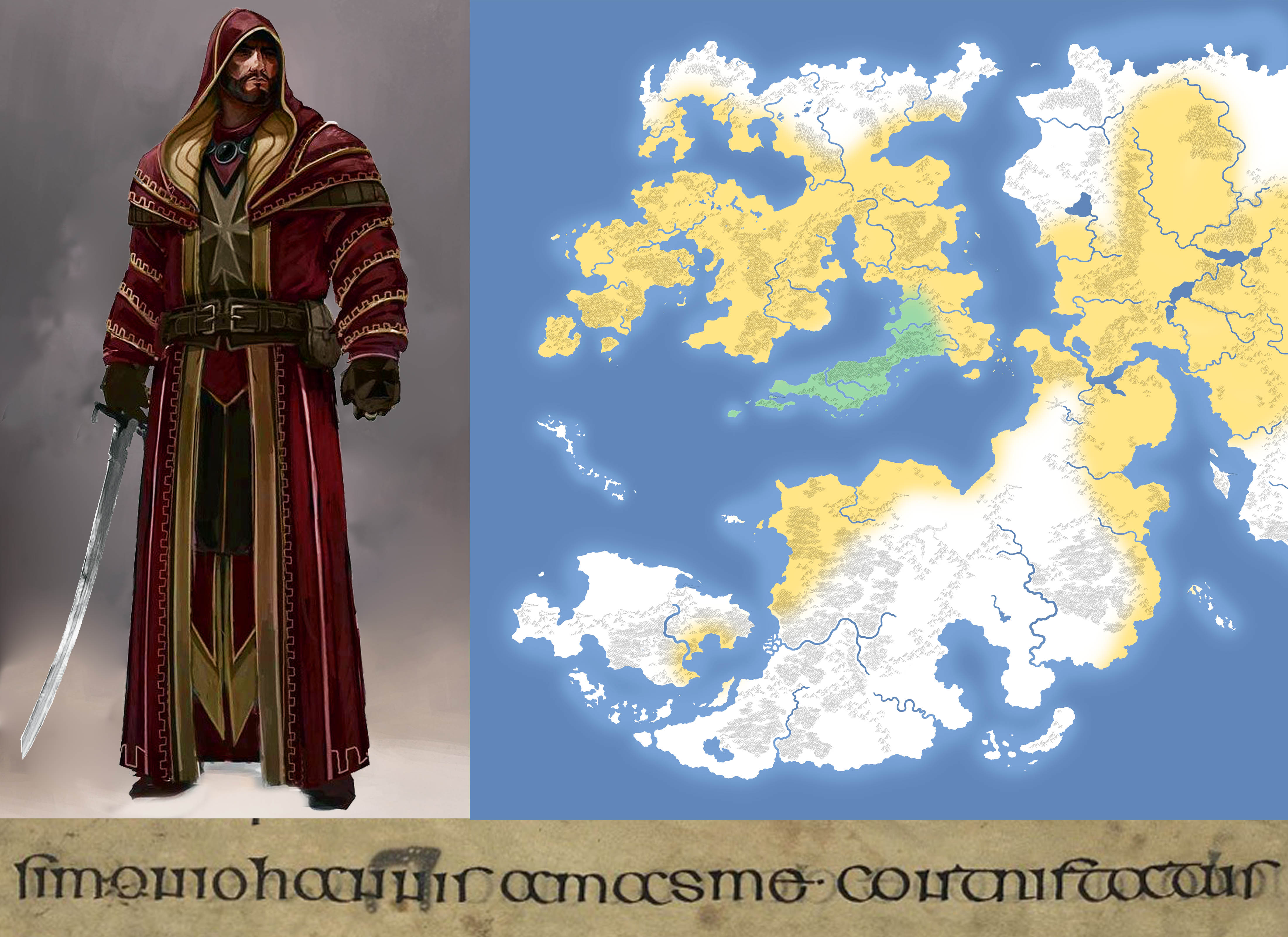 Homeland: Talia
Language: Talian
Alphabet: Talian
The Talian Nationals as a people are generally olive skinned with dark hair though lighter complexions and hair colors are not unheard of. They can have eyes of nearly any color. A rare few retain a characteristic of the Old Royal Bloodline; eyes of lavender hue. 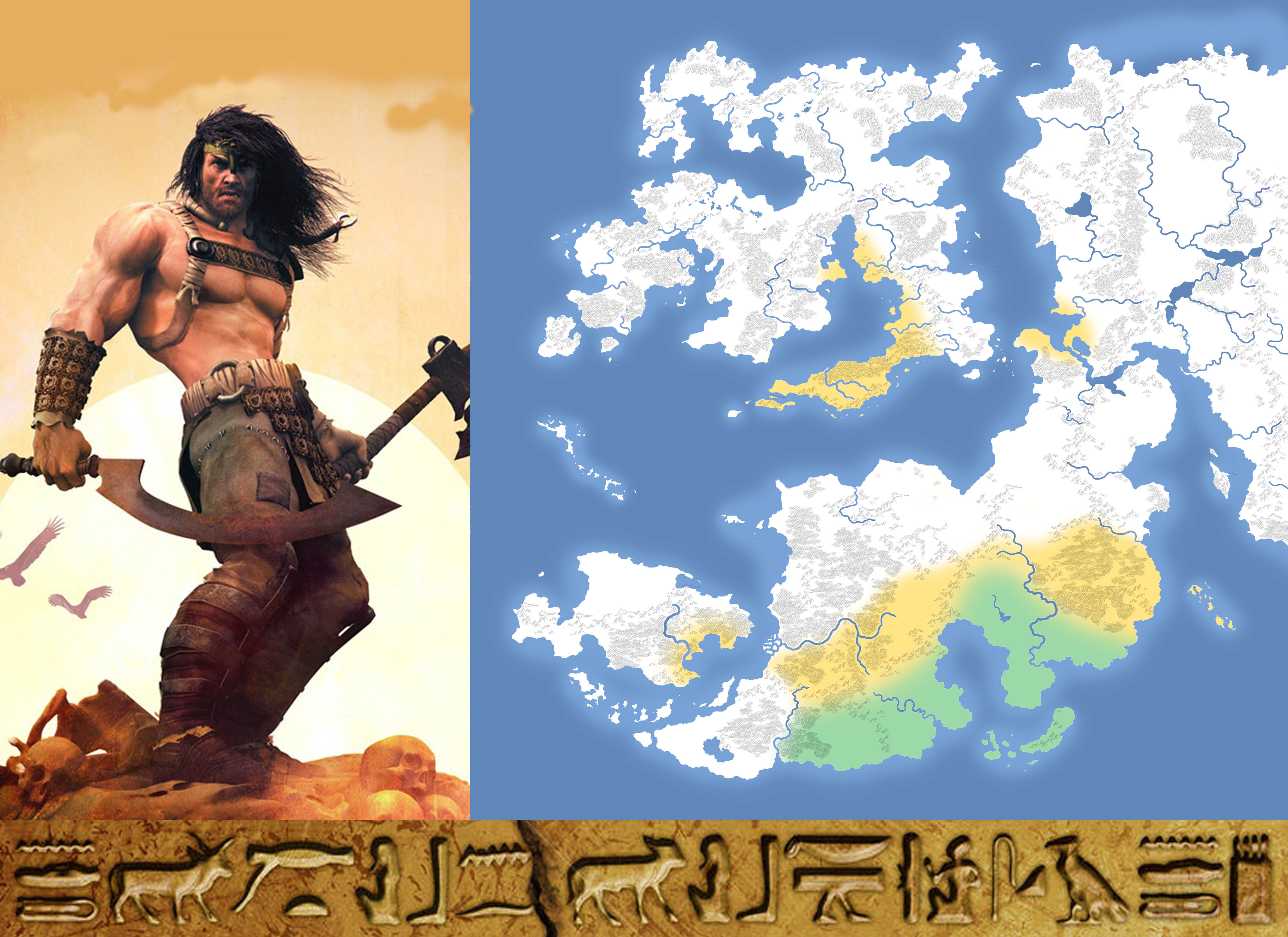 Homeland: South Eddra Kha
Language: Hemetian
Alphabet: Hemetian Glyph
Tolkeshi abroad can be of nearly any complexion, though those encountered in their own lands will tend to be of a darker hue due to the punishing sun of the South Lands. Eyes and hair can be of nearly any hue, though it is a fashion held by all ‘civilized’ Tolkeshi to stain their hair black. Slaves are shaved to identify them as such. 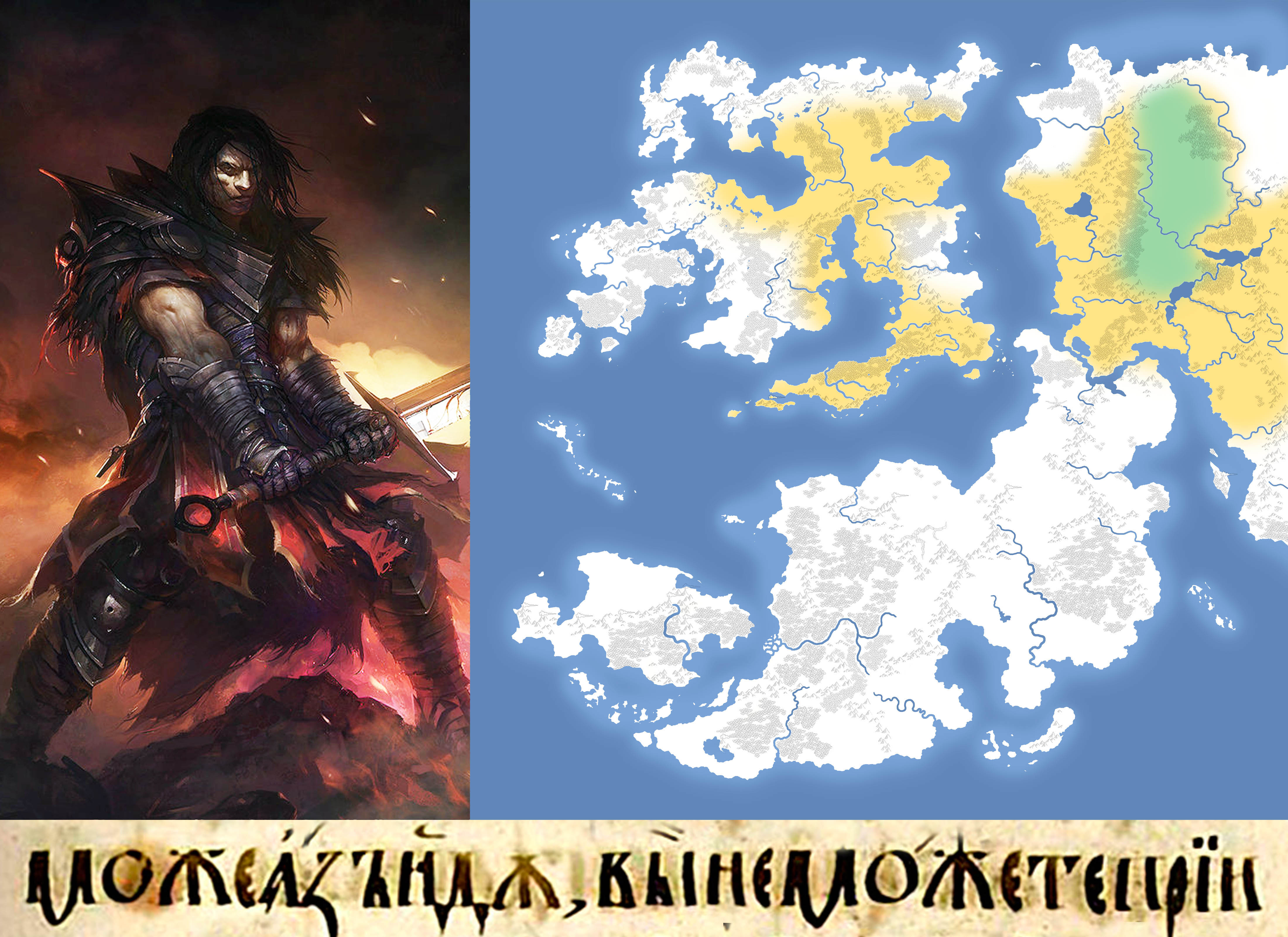 Homeland: West Ersai
Language: Maktovian
Alphabet: Vec
The Vohazari people are light skinned overall and have darker hair on the average, though a fair-haired individual is not unheard of. They have a wide range of eye color.

Additional rules on the languages of the Bloodlines of Men can be found by clicking the link below: 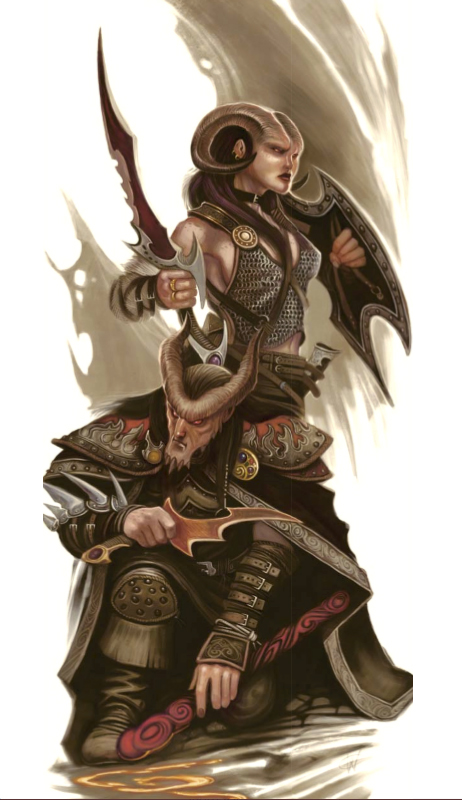 Tieflings are descendant from citizens of the fallen Empire of Acheron. They are ‘cursed children,’ being the ninth child born from a bloodline of Talian nobility from ages past. Families by and large have tried to hide this curse down through the ages, leaving some to even disassociate themselves so completely through denial and ‘things unspoken’ that they ‘forget’ about their familial burdens, sometimes for as much as two or three generations. That is, until a ninth child is born.

Outside of Talia descendants who bear the burden of such a bloodline tend to have a more enlightened view of their unusual offspring, though total acceptance from either family or community might not ever be truly realized.

A marital union between two ‘cursed’ descendants of Acheron will not alter the cycle of the ninth birth (they will produce as many or as few healthy, normal children as any couple might), nor will a tiefling’s abstinence from procreation; wherever surviving members of the marked families settle and thrive, a ninth birth will surely come.

There are some zealots in the world who feel it is their divine duty to remove these ‘…blighted hellspawn of Acheron.’ As strange as it may sound, these individuals and organizations originate from traditionally wholesome theologies as often as not.

The Bloodlines of Humanity