Note: These rules are narrative and are intended for players who wish to take a hand in sailing the seas themselves. Chartered ships run by able NPC crews and the circumstances of their respective voyages should be left to the DM and the needs of the adventure.

The Captain and The Sea

The standard DC of the vessel might increase depending upon conditions such as adverse whether or loss of ranks in any crew under the captain’s command.

Ships and the Main Game Map

TIME ON THE WATER
The standard amount of time it takes for a vessel to clear a hex or to reach a navigation point (where three hexes converge) from a cleared hex depends on its speed.

NAVIGATION
Water vessels travel from their current location (wherever that may be) to adjacent Hexes, Navigation Points (nav points), ports, or coasts. For clarification on Hexes and Nav Points, click here: Cartography and the Main Game Map

To reach any of these destinations requires a Skill Roll from the vessel’s captain.

If even 1 able shipmate who also has the Background: Sailor assists the captain, this roll is made with advantage.

If the captain does not have the Background: Sailor she/he rolls with disadvantage.

A ship must skirt the coastline, traveling from hex to hex until it can reach an ocean born nav point.

Example: The charted course on the map below will take a Steady Vessel from the port of Byrnaer in Shailia to the port of Sunia in Talia. Hexes and point paths marked in yellow denote 24+2d12 hours of travel, as do the paths of the open ocean marked in blue. If all goes well, this journey will last 10 to 12 days on the average, but could conceivably last as long as 16 days or more if the sea gods are unkind (see; The Captain Fails below). 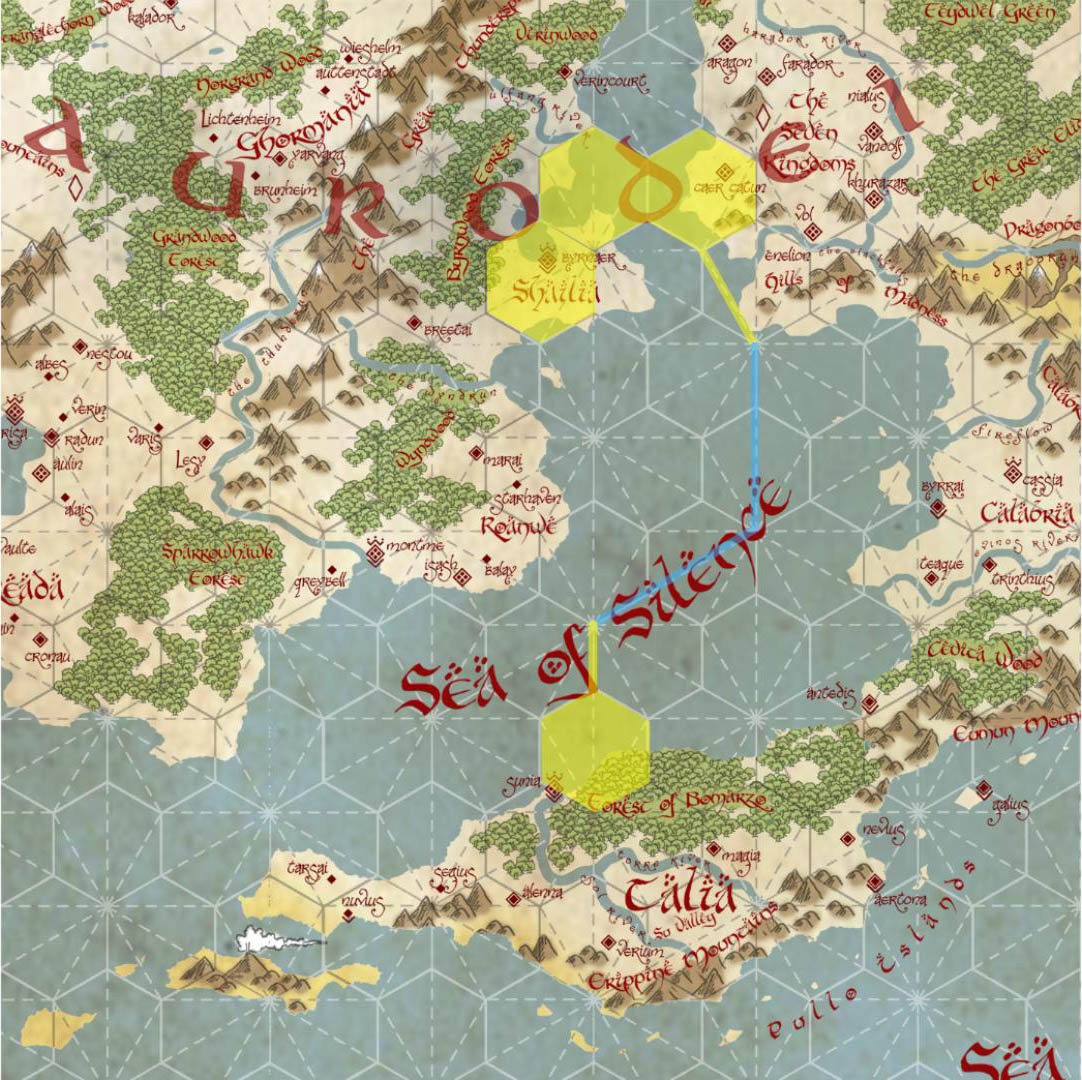 CREW
The ship must have an able crew, meaning the minimum complement necessary to man her stations. Some vessels require only a single operator, while larger, more complex ships necessitate a host of sailors.

Crew size depends on the number of full sails the vessel is rigged with, being two sailors per Full Sail. Tall Masts can support up to five Full Sails, Standard Masts up to three Full Sails, and Small Masts up to one Full Sail. Also, for every five sailors there will be an officer that oversees them (not including the captain).

If a vessel is undermanned, the DC against the captain’s Skill Roll with be modified as described below:

Example: A vessel with a Standard DC of 15 that normally requires 15 sailors to man her stations with a crew of 12 mandates a DC 16 from her captain.

There are 3 separate d20 rolls to make to establish the starting travel conditions at the beginning of the voyage; one for the wind, one for the temperature, and one for the weather.

Roll 1d20 to determine the wind conditions. The terms ‘favorable’ vs ‘unfavorable’ are meant to quantify both the strength and direction of the prevailing wind.

Now roll 1d20 to determine the temperature. Where you are in the world has more to do with the actual temperature than the dice. For instance, a ‘Coldsnap’ off of the northern coast of Chula in the summertime would be in the mid 40’s.

By and large the temperature will have little to no impact on the journey unless it is so cold there is a danger of ice, or so warm it threatens the health of the crew.

Day to Day Wind and Weather

Once the baseline for the weather is set, roll 1d6 for each of the three categories every 24 hours (no score may be shifted to less than 1 or more than 20).

Extreme weather conditions (category 20+ or 1-) should not last more than 72 hours even if the dice say that they do. If this is the case the DM should on the fourth day shift the respective weather condition(s) two scores away from the extreme for a break in the weather, then resume rolling a daily 1d6 thereafter.

If the captain fails to meet or exceed the DC, add 2d12 hours to the standard time it would have otherwise taken to clear a charted hex or reach the next nav point, port or coast.

If the captain rolls a natural “1” there will be a maritime mishap of some sort; the ship may take on water or become damaged, or there could be a problem with the crew. In any event, add 3d12 hours to the standard time it would have otherwise taken to clear a charted hex or reach the next nav point, port or coast.

The Captain Fails Three Times in a Row

If the captain fails on three consecutive attempts, the ship will be blown off course or run aground.

Ship is Off Course. If the vessel is to enter the open sea (blue line travel) it is blown off course. To find the vessel’s new location start with the intended charted nav point and roll 1d12 to determine a random direction. Follow that zig-zag path (no straight lines of travel allowed) for 1+1d4 points and you will have the ship’s actual location (stupid luck may work in the player’s favor, with the ship being on course and leagues ahead of schedule, and the dumbfounded captain saying, “Uh… I meant to do that!”) . If this location is a land mass then the ship is considered to be in the shallows off of the coast. The captain may now try to navigate to the nearest nav point, port, coast or hex and continue the voyage as per usual.

Ship has Run Aground. If the vessel’s charted course was to enter the shallows off the coast (yellow hex travel) it will run aground. The ship must stay where it is to free itself and/or affect repairs for 1d4 days. Once this time elapses the captain may try to navigate to the next nav point, port or hex and continue the voyage as usual. 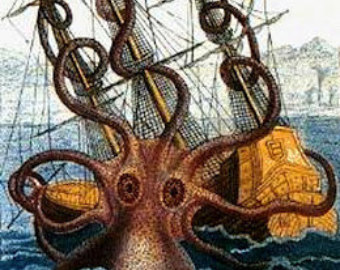 If the captain rolls a natural “1” on what would be a third consecutive failed attempt, there will be a maritime disaster of some sort. The ship could become beached or damaged to the point of sinking, or there could be a mutiny on deck. Certainly something that will trigger an adventure!

Ships that are not Engaged (see below) use a Nautical Round, each lasting 15 minutes in length.

The ranges between ships on the open water are as follows:

Captains who are chasing one another make piloting rolls against a DC of 15 (modified by crew compliment as per CREW above) to see wether or not the range between their respective vessels increases or decreases. If both captains succeed or if both captains fail, the range remains the same. If only one captain succeeds, he or she may determine weather the range between their vessels increases or decreases.

Captains who’s ships are Engaged may attempt contested piloting rolls to determine the facing and positioning of their respective vessels. This roll is then modified by the ship’s speed and the number of available crew at the captain’s disposal

If the ship is undermanned then reduce its speed according to the chart below. If the ship is already ‘Plodding’ use the corresponding dice modifier instead.

The winning captain may then choose the Orientation of his ship in relation to any single ship of any captain he defeated in the contested piloting roll.

As an alternative to the standard rules for combat, here is a faster narrative way of handling ships at war.

No initiative: Everything happens at the same time.

To Hit:
Roll a d20 for the attacking crew and modify it according to the crew’s Worth. If the crew is of mixed ranks in Worth, choose an appropriate average.